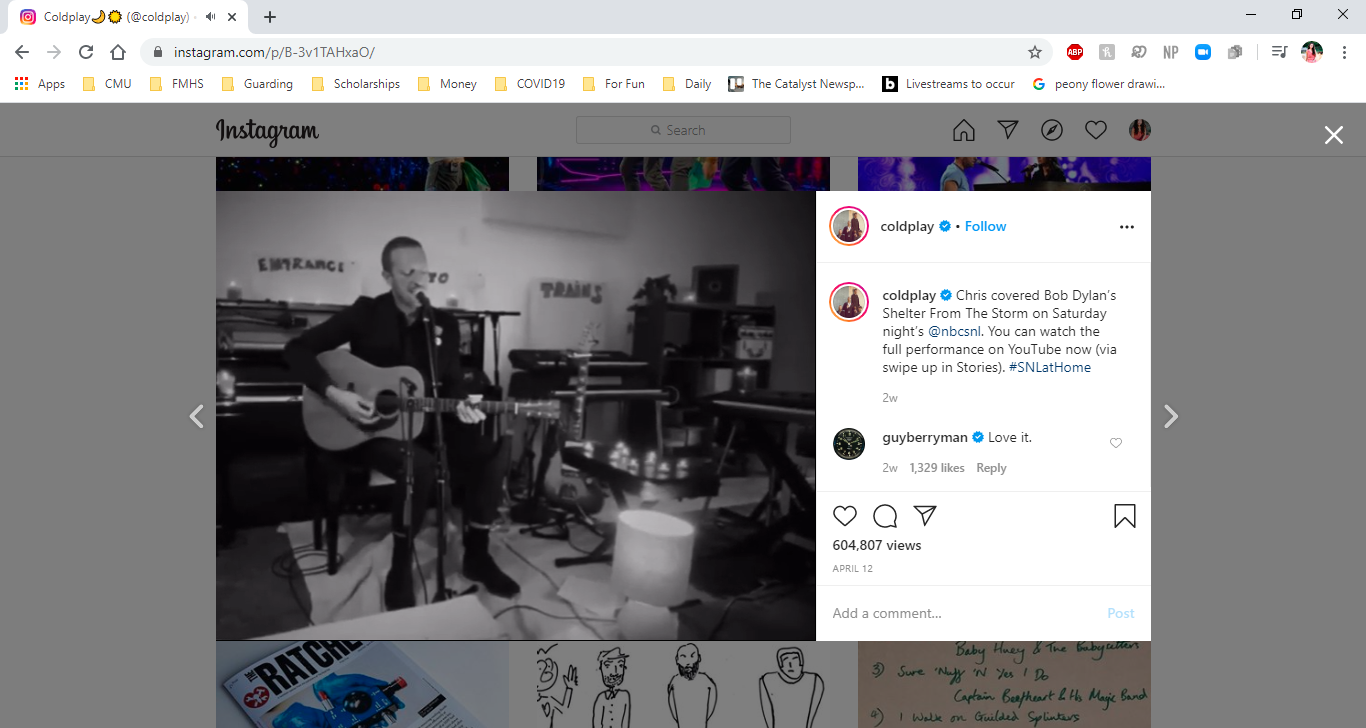 Living room concerts are bringing joy during this hard time

Coronavirus has been the cause of numerous music festival cancellations like Coachella and the Ultra Music Festival. Artists such as BTS, Louis Tomlinson and Mariah Carey have been forced to put their shows on hold. Music lovers, especially those who were signed up to attend the events, were quite disappointed to hear the news.

According to psychologies.co.uk, “music works on the autonomic nervous system, which is responsible for controlling blood pressure and heartbeat, as well as the limbic system, which is responsible for feelings and emotions. A review of 23 studies by Bradt & Dileo (in 2009) involving almost 1,500 people found music helped to reduce blood pressure, heart rate and anxiety in heart disease patients.”

This explains why so many people say music makes them happier. Of course, Spotify, Apple Music and Youtube are excellent sources to listen to some tunes. But many concert goers know, the experience is different when you hear someone live or see your favorite artists stage presence.

When Chris Martin and John Legend, among others, took to Instagram Live for some impromptu concerts, fans were exhilarated and their moods elevated.

Gaby Bowman, senior at FHMS, hasn’t seen any live concerts yet but says, “I think Instagram Live concerts are an amazing idea in times like these. A lot of people could use their spirits lifted and what better way to do that then enjoy some great music from the best artists in the comfort of your own home. A professional concert for free, pretty awesome!”

Alyssa Biddle, senior at Fruita Monument High School, is a fan of John Legend. “I love his music. [And] I like [the IG Live concerts] because it can show you more of how real they are with them wearing what they want and acting like themselves. Compared to when they do real concerts and have to act a certain way.”

As Biddle explained, these Instagram Live concerts take place in the artist’s own homes, bringing comfortability while still celebrating their music and giving insight into how these artists are truly human beings too.

The popular K-pop group, BTS, introduced “Bang Bang Con.” It consisted of two nights of the performers showing their old concerts. While taking time to interact with their fans during breaks of stretching and communicating the importance of physical and mental health during times like these, and in general. For more information on the past event, visit here.

Leilani Colon, FMHS alum, tuned in for parts of the Con. “I like how it was all older concerts,” she said. Ranging back to 2014, according to variety.com. “It gave newer fans a chance to see how they’ve grown in experience and talent. I also liked that you didn’t just watch the old concerts… They had clips here and there of their current selves stretching, making it super interactive as possible for an at home concert.”

Colon continued by saying, “[i]t was good quality… It was nice to watch and have a great sound system/screening of their shows without it being pixelated. After becoming a fan I went back and listened to their older music but it was nice to watch them perform while at home.”

Like many other artists who felt the need to create some positivity in today’s world, Elton John hosted iHeart Concert with a “star studded lineup,” news.iheart.com explained. Alicia Keys, Camila Cabello, the Backstreet Boys, H.E.R., and more performed in the iHeart Living Room Concert for America. $10 million was raised to create relief from COVID-19, which goes to show how many people were watching.

Whether tuning into a full length production like that of iHeart radio’s interests you or seeing who’s going to play on their social media, there are plenty of options. To find some livestreams and virtual concerts visit here.