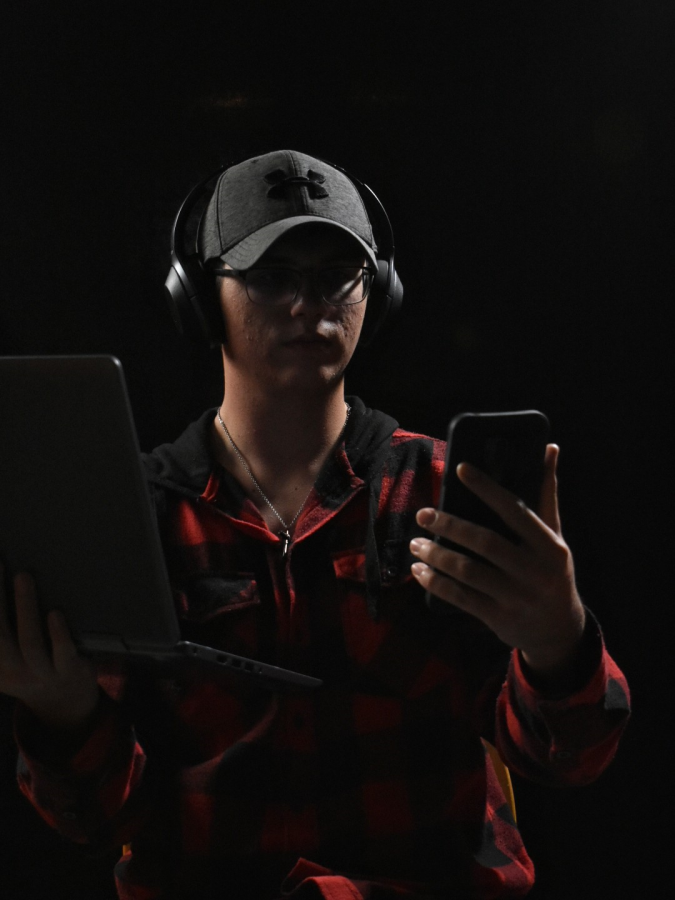 Somewhere in the world, there is a teenager holding a phone in one hand and wiping away tears with the other. The teenager’s parents likely blame the phone for the fact that their child is struggling. It is probable that the teenager  refuses to put any blame on the phone at all. So who is right? Is technology the cause of Generation Z’s high rates of mental health issues? Or is it a component at all?

It is quite difficult to compare the levels of contentment over different times throughout history. It is known, though, that Generation Z (those between 8 and 23 years of age) has a very high rate of mental health problems reported. According to apa.org, compared to other generations, Gen Z is least likely to report very good or excellent mental health. The suicide rates of ages 15-24 have also risen by 51% over the past decade. There are many different opinions on why Gen Z has so many mental health problems but most involve electronics.

There is a constant battle between parents and their children over the amount of time that teens, in particular, spend on electronics. Many teens devote countless hours of their days pouring over social media, video and film- watching services, video games, and other aspects of the internet in general. Parents often defend their claim that their children should limit screen time in saying that electronics are detrimental for mental health. Middle-aged adults in general seem to share a similar perspective on the issue.

The staff members of Summit Therapeutic Day Program, a program that works with special education kids with mental health needs work in close contact with students and their parents. The staff members have seen all sides of the argument over electronics and have much input on the matter. Some of the staff interviewed believe that electronics do not have a major negative impact on the mental health of teenagers while many believe that they do. For those that believe they do, many justifications for the opinion are listed. The most voiced were lowered self esteem, decreased social skills, damage on relationships and addiction.

Abby Murray is a school counselor at the Therapeutic Day Program. In her 9 years of being a counselor, she has seen self esteem decrease a lot, often because of technology. She mentioned students comparing themselves to others in the form of likes, follows, comments, etc.

Michelle Luby, a school mental health therapist at the Day Program, mentioned that the teenagers get a “skewed image” of the world around them, assuming that everyone else’s lives are as remarkable as they appear on screen.

Jess Condon, a high school special ed teacher, asserted that the combination of lowered self esteem and hormones can be destructive to teenage mental health.

When walking through the doors of a school, it is completely expected to see groups of teenagers standing around fidgeting with their phones. The staff at Therapeutic Day program witness this frequently. According to Codon, “Young people can’t truly decide how they want to interact with the world, so they go to social media.” When they don’t have practice socializing in real life, many teens end up missing out on social skills that were taken for granted by prior generations, resulting in a sense of loneliness and lack of ability to express oneself.

Social media’s damage on relationships was not only discussed by many Therapeutic Day Program staff members, but in a rather unique way by Bruce Hebel, a retired grandfather living in Minnesota. Hebel grew up in a basement house with his four siblings and two parents.Despite having little money, he says that he was very happy and had extremely full relationships due to the lack of technology. He stresses the importance of quality time, conveying that it is at the top of his priority list to pay attention to his face-to-face company before any electronics. In his words, “When you get older, you realize that people die and you start to wonder if you should have spent more genuine time with them.” Murray mentioned another damaging effect of electronics on relationships, which is the increased likelihood of fighting. In some cases, she says, a pair will fight over social media and act completely fine in person. The stress of fighting or their lack of is likely to damage the mental health of those that suffer it.

Addiction is a frequented word when the nature of technology is discussed. As Condon puts it, “Technology is very sticky and people want to interact with it.” She also mentioned that youths have been shown to be pulled in by the exciting spike in dopamine that electronics create over the deep, rich, feeling of serotonin associated with personal connection.

Most of the Day Program staff agreed on the constant, ever-changing pull of electronics that draws people, especially young people in. Having something to monitor around the clock is likely to promote more anxiety.

Concern about the mental health of Generation Z due to electronics is not rare, but neither is the idea that technology contributes very little to the struggles of Gen Z. Connie Andrews, a middle school special education paraprofessional, believes that while electronics do cause some issues, every generation has their issues. In her words, “When I was young, sitting in front of the TV was ‘ruining kids’. There’s always something”. She, like most of the Therapeutic Day Program staff, says that depression, anxiety, and other mental struggles have always existed. With every generation, Andrews says, the population’s mental health comes further into the open. In her opinion, increased mental health problems in Generation Z are due to increased knowledge of it.

Another member of the Therapeutic Day Program, Joe Lansang, agrees with Andrews in that electronics are not a main cause in the Generation Z mental health decline. He is a special ED middle school teacher and believes it likely that texting will be an important means of communication in the future. He recognizes that it may be difficult for some youths to control their technology use, but believes that parent regulation does plenty to keep it reasonable. Lansang has much to say about the many aspects of technology and stated, “Technology is a double edged sword,” referring to the fact that it has many benefits but can also be dangerous.

One important aspect of the argument that has gone without being addressed is the viewpoint of teenagers on the subject. Over 200 students, most of which living here in Mesa County, were surveyed. 81% of these youths reported that electronics are a likely cause of the mental health struggles of Gen Z. Despite possible problems that electronics cause, most of those surveyed continue to use their electronics. The fact that the survey was conducted through Instagram could present a bit of irony considering the amount of teens that stated electronics were bad for their mental health. According to many of them, the positive aspects of technology outweigh its negative mental health trade-offs. Many interviewed stated the electronics are an exceptional way of communicating with those that are not accessible. It was also frequently mentioned that social media is very good entertainment and that the internet is a useful resource for learning.

Whether they are contributing to poor mental health or increased anxiety, electronics are likely to be an element in Generation Z’s poor mental health. There is, of course, no way to prove that they are the main source of the lowering of happiness in Generation Z. It is quite possible that there is a mix of causes for this, but it appears that most people are on the same page about electronics being a contributing factor. The raging warfare over technology between parents, their children, and the rest of society will continue. There is no true way to predict the outcome, but we can always try to keep a clear view on the problem.