Can we just print more money? 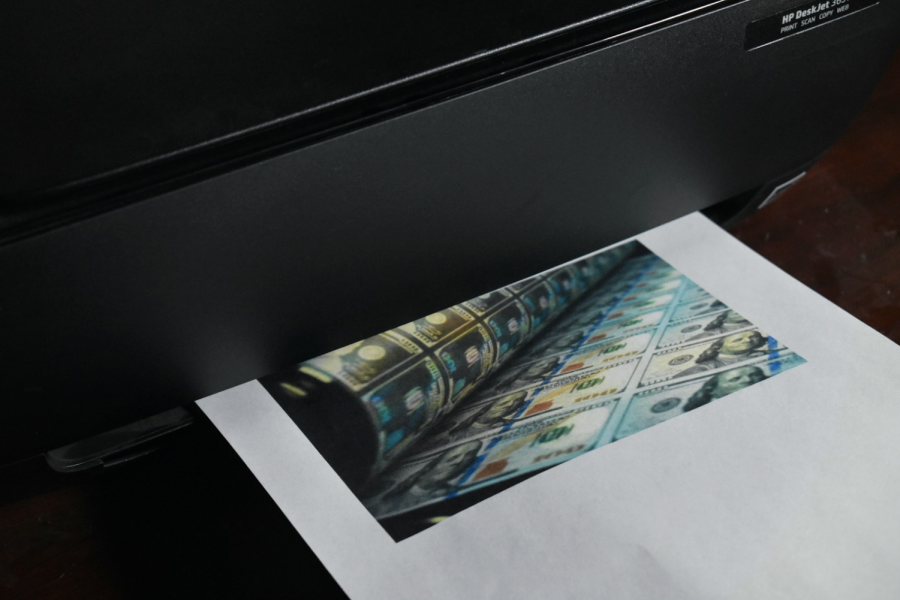 Perhaps the most-asked question in the field of macroeconomics is a deceptively simple one: Can we just print money? This is the rational reaction to learning the basics of economics. Introductory classes tell you that the US government creates its own money that hasn’t been backed by gold since 1971, and yet there never seems to be enough funding for public schools or fixing potholes. Those who inquire as to why this is often receive a snide, oversimplified response to by people who imagine themselves to have PhD’s in economics that consists of saying “inflation” and walking off haughtily, but this reply is far from satisfying and in fact somewhat misleading. In actuality, there is currently conflict in the economics community about this very question. Highly qualified economists are beginning to claim that we can create our own money(with a few caveats), though this idea is still far from mainstream. The author of this piece is not qualified to say which side of this debate is correct, so you, reader, must resign yourself to gaining a better understanding of what “printing money” really means and what our government can- and can’t- do for us.

There exists a problem that must be addressed early on with how the question is asked. Money is not “printed” by the government, but is rather created digitally and supplied to various banks. Usman W. Chohan at the UNSW Business School writes that “money today is not even paper money but rather a set of digits in safely-guarded spreadsheets, and that money is largely “credit” created rather than cash delivered….” For the sake of accuracy, therefore, money shall be discussed as being created rather than printed for the remainder of this article.

Now to address the ubiquitous response to the question posed in the title of this piece: inflation. Inflation is defined by the Federal Reserve’s website as “a sustained increase in the general level of prices, which is equivalent to a decline in the value or purchasing power of money.” This occurs basically when there is too much money chasing too few resources. When an economy is in a recession or performing below potential output, there is room for a greater money supply without causing inflation, because the economy has “room” to “absorb” that extra credit or currency. When the economy is “running hot” (at low unemployment and high GDP), government spending runs a high risk of creating inflation due to an excess of currency or credit in the marketplace. Therefore, inflation will not always occur if the Fed creates money, so the inflation rate depends on how that money is distributed into the economy and how much money is removed through taxes (fiscal policy) and the interest rates set by the central bank (monetary policy).

This is the point of controversy in macroeconomics. In recent decades, a new theory known as Modern Monetary Theory (MMT) has emerged.  Jayadev, A., & Mason, J. W. in “Mainstream Macroeconomics and Modern Monetary Theory: What Really Divides Them?” write that MMTers believe basically in functional finance, that “governments should set their fiscal position at whatever level is consistent with price stability and full employment, regardless of current debt or deficits.” This is opposed to the traditionally accepted view that deficits drag down GDP and should therefore be minimized in order to maximize economic growth. And, of course, government deficits create a national debt.

Unless you are a toddler or living in meditative solitude in a forest in Montana, you know that the United States is in a lot of debt. $28,832,808,139,312 and counting as I write this, according to the US Treasury.  This debt is not the same as the debt held by normal households, though. While any citizen can default on student loan payments, for example, the government in the United States can never default on its debts simply because the US has its own floating currency (currency that isn’t backed by gold) known as a fiat currency. This means that the federal reserve is always able to “create” enough US dollars to pay off debts to other countries or American citizens when and if they come due. In a description of the foundations of MMT Chohan notes that “the sovereign has monopoly power over the instrument(the currency) and can issue as much of it as it likes…It can then pay for its debts denominated in that currency by simply issuing more of it. After all, in the post-gold standard era, what is the value of its money tied to but itself?” This idea is generally accepted in modern economic thought, but the consequences of it are disputed, as will be discussed later on.

There is also a consensus that the national debt should not simply be erased, as is explained by NPR’s David Kestenbaum in saying “[i]f the U.S. paid off its debt there would be no more U.S. Treasury Bonds in the world.” This would eliminate one of the most trusted and most widely used investment vehicles, which would bear grave consequences for economic health nationally and globally. On the other hand, deficits do have their harms as well. A report by the Congressional Research Service notes that “over time, persistent budget deficits can hamper economic growth. Deficits represent an intertemporal transfer from later generations to the current one, as money borrowed now will eventually require repayment with interest. The effect of deficit financing on economic output depends on the nature of the government activity being financed and the private activity that would have otherwise taken place.” This idea is at the heart of fiscal(government spending) policy debate.

In the postwar era, the US government became hyperconscious of the growing national debt, and conservatives pushed smaller government spending and balanced budgets so the deficit could be reduced without the necessity of taxing Americans. George H.W. Bush emphasized this idea in his 1988 acceptance speech of the republican nomination, saying “Read my lips: no new taxes.” This reflected the philosophy that the government taxed its citizens to fund its projects, so smaller government meant less taxes. This was contested by those who thought that the government should tax its citizens more in order to create government programs that redistributed the money more equitably across income levels.

Modern Monetary Theory essentially claims there is a third option. This idea is that instead of taxpayers funding government projects, the government can create unlimited amounts of money to spend, and then tax the money back out to limit inflation if necessary. Therefore, as Peter Coy, Katia Dmitrieva, and Matthew Boesler at Bloomberg Newsweek note “the only constraint on spending is inflation.” This idea is not yet widely accepted. Fed Chair Jerome Powell has described MMT as “just wrong” and there are many reasonable questions about the validity of this theory. For example, many believe that there simply won’t be the political will necessary to tax Americans quickly enough to avoid hyperinflation. On the other hand, many of the economic principles we use today are still based on ideas from before the US adopted a fiat currency, and the separation from the gold standard undoubtedly has consequences that we have yet to fully realize. Kade Bessert, a student at FMHS, summarizes this well in a paper on the subject, saying “The theory will continue to improve, and it will eventually become the economics of tomorrow that we are witnessing today.” MMT will undoubtedly leave its mark on the textbooks and policy of future economic thought, regardless of whether it is fully accepted.

So the answer to the question is… maybe? There are a lot of unanswered and fiercely debated questions about how government spending works in a country like the US. To clarify, directly putting money into Americans’ hands is only advised in recessions like the one we are currently recovering from. Stimulus checks will likely never be commonplace, because direct liquidity is likely to cause some inflation in healthy economies. Other types of government spending could change though. It’s possible that the federal government could create the money necessary to fund large infrastructure projects without taking the money from taxes. Or that could be a terrible idea. The truth shall hopefully be revealed in due time. But until then, dear reader, you should carry multiple copies of this piece around with you to politely hand to those who strut around chanting about inflation as if they hold all the secrets of the universe. After all, nuance is the best medicine for arrogance.