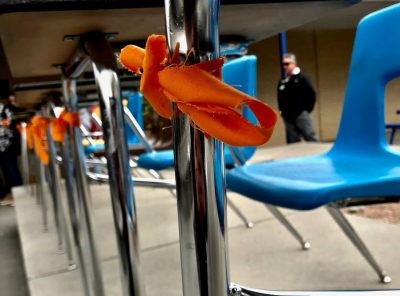 A Walk Out To Remember

On March 21st, many Fruita Monument students stood up during third hour and walked, or more appropriately, flooded, into the courtyard to honor the fallen students of Parkland  for 17 minutes. As dozens of students filed into the courtyard bearing orange ribbons and posters, the desks lined up, each one representing a fallen student from the mass shooting just weeks before, gave a haunting picture of the horrific event that had happened in Florida just weeks before.

On February 14th, a mass shooting occurred at Marjory Stoneman Douglas High School, where 17 students were killed and 17 more were wounded, making it one of the world’s deadliest school massacres. And just five weeks later, with protests, rallies, and marches led by students shaking the nation, Fruita Monument decided to find a way to recognize the heroes and everyone involved in the event that impacted students everywhere.

Organized by students, the FMHS walkout was able to become a success due to the promotion of students as well. News outlets caught wind, and covered the walk out by interviewing the student who arranged it.

One of the most impactful parts of the walk out was the media coverage. The group of students that had come together to pay tribute created signs, took pictures, set up desks, tied ribbons, embraced, cried, stood stoic, and came together- and it was all captured through the lenses of students. The safety of school is now an extremely controversial subject in all news outlets across the US. However, it’s important that we don’t forget to remember that the statistics we hear about are people’s lives- children’s lives. So in order to show the significance of the walk out at Fruita Monument, a photo essay has been arranged- consisting of photos taken from manifold students that were able to capture the essence of what it looked like when a group of students comes together to pay respects and remember to find sympathy. Because in this day of mass media and easily spread false information, sympathy for each other as humans is all we really need sometimes.