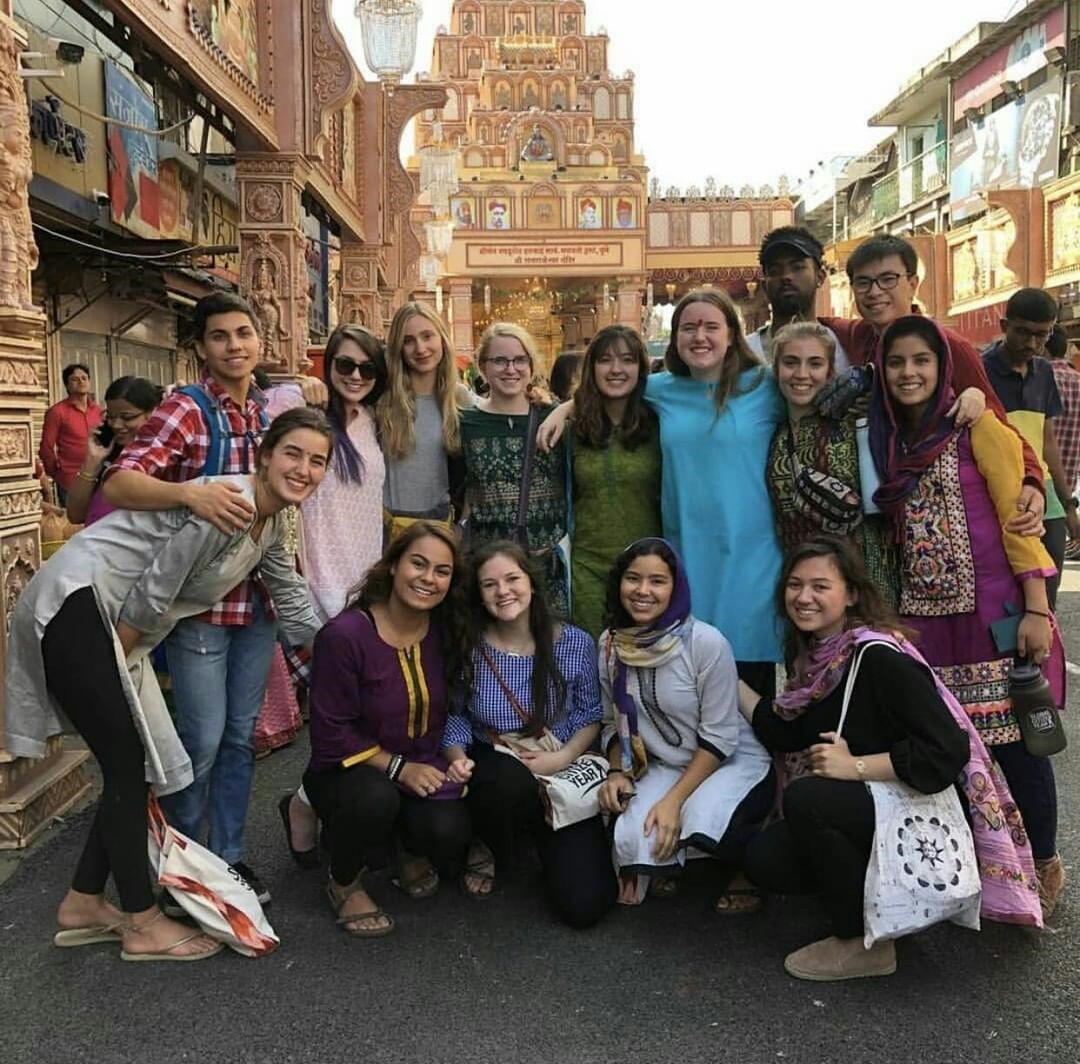 Faith Anderson poses with other students in the market in India

India has of late become a bit of a popular destination for Fruita Monument students seeking to change the world. Its most recent traveler- last year’s graduate, Faith Anderson.

Anderson arrived in Pune, India on September 2nd- the start of what was to be a long and inspiring journey. She will spend eight months there teaching through a program called Global Citizen Year. Though Faith didn’t originally plan on being a teacher, Global Citizen Year has a partnership with Teach for India (very similar to Teach for America), and she wound up working with a TFI mentor in a classroom of “8th Standard” kids. Caleb Hicks, a Physics and Student Senate teacher at FMHS, was extremely influential in helping Anderson find the courage to tackle teaching.

Anderson claims that he constantly encouraged her, reminding her that she could be a wonderful teacher, and she says, “Shout out to Cal Pal (Mr. Hicks) for constantly telling me I’d love it and be good at it. Because both are true, I’d like to say, and I absolutely love it.”

Rather than gloss over Faith’s story, I decided to give you a look into a typical day in her shoes:

5:30am – The day begins. Faith’s host mom, Āī, makes a breakfast of chai and biscuits and sends Faith off to teach at a public school called Pandit: DinDayal Upadhyay English Medium School. (Note- because lice are common in schools, Faith must keep her hair piled on top of her head.)

6:20 – Faith leaves her host family’s house and begins the long trek to school. She says, “I am very lucky because my school is within walking distance, half an hour.” Many of us here in the States would balk at the prospect of having to walk thirty minutes to a school.

6:50 – Faith arrives, greeted by, “a chorus of voices yelling, ‘Good morning, Didi!’” In India, “Didi” means “older sister”- a term said out of respect. She usually spends about twenty minutes socializing with her students before class really starts, and she says that while she truly works with 8th graders, pupils from all over the school come to talk with her.

7:15 – School starts. Faith’s class is on the third floor where she organizes kids as they do their daily rituals: the pledge, national anthem, and close to four different prayers. It takes thirty minutes for Faith to accomplish all this AND call attendance for fifty-three students.

8:00 – Faith’s Teach for India mentor arrives, and the fun begins! In these classes, there are six subjects instead of four: Maths, English, Social Studies, Science, Hindi, and Marathi (they are taught two different languages specific to India along with English.) Faith works with struggling kids during Math and English out in the hallway, and for the rest of the class day, she helps around the class, grades papers, and creates lesson plans.

9:55 – Lunch! Here, their break for lunchtime is only twenty-five minutes, but Faith remarks, “I can always count on the kids feeding me new food that they’re just dying for me to try.”

12:15 – School ends. An hour or so after (and only on Fridays and Saturdays), Faith heads to her Hindi class to learn the local language. Other days, she’ll go to a cafe or meet up with the other members of her Global Citizen Year group.

7:00pm – Faith arrives back at her host home. Another day done, she prepares to start again tomorrow.

Looking at the life they live in Pune next to ours, we are able to see how extraordinarily lucky we are for our simple pleasures that we take for granted so often. Faith’s school, for example, lives by a six-day school week with only Sunday off. And while lice are still a pest here in the States, we don’t have to pin our hair back every day just for that reason. Our classroom size? It’s nowhere near the astounding population of fifty-three students. A big classroom at Fruita would merely be over twenty students.

Faith reflects on her time in India, saying, “My overarching purpose being here is a gap year. Personally I am doing a lot of self healing and evaluating what I would like my future to be.”

Having the opportunity to travel and see the world all on her own has ignited a new passion for Faith. When earlier she felt limited by her own “inexperience,” Faith now feels excited about the possibilities this life holds for her. “I hope to become more of a world citizen, rather than a U.S. citizen,” Faith continued, “After all, we all belong to the same planet.”

Faith will return to San Francisco at the end of her eight months- April 8th. Welcomed back by her family and friends, and bursting with new ideas the world has taught her, it will be exciting to see where life takes her. Whether it’s visible yet or not, Faith Anderson is impacting her world for the better. At a young age, she has already found it in herself to start giving back. She adds, “I don’t know if I’m making a difference in these kids lives or not. I do know they’re making a difference in my life though.”