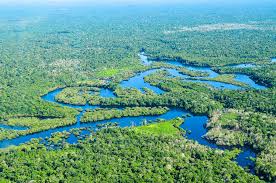 Many would describe 2018 to be one of the craziest and most odd years in a while, aside from 2016 because I mean those murdering clowns that were forgotten in 2017 were the weirdest thing to happen in my lifetime. Politics have been all over the place, some of the best shows on tv ended, and a lot of violence occurred around the world. And yet, the world is not a bad place and good things have still happened, such as the following ten.

With the major changes of our environment and the recent news that if we don’t change something, 2030 may be the year our earth dies, it is absolutely great news to hear that more trees in the rainforest are being protected from deforestation. This helps save habitats of many animals and provide better oxygen for humans as well. The benefits of saving it are endless.

The LGBT community received love and support from one of the places we need it most: Churches. The change is coming for the community!

After waiting 41 years, NASA completes another accomplishment! One small step for man, yet another huge step for mankind!

After the school shooting in Parkland, Florida, some students of Marjory Stoneman Douglas made an impact worldwide. Protests lead completely by students, organizations, interviews, etc. The students are making a huge impact on the world they are growing up in.

Cancer is one of the most destructive things in life and the numbers of those affected are far too many. 2018 brought a lower percentage which means a better quality of life for 25% more people.

Feminism is becoming more known in this generation

Some people’s favorite animals are no longer endangered due to extreme protection and habitat repair. Every animal has an extremely huge impact on our world and losing just one could change everything.

The world was brought together yet again for another Winter Olympics and the United States did quite well. It’s easy to get lost in the world of negatives but the Olympics are a good way to be reminded of the lovely things.

The #MeToo Movement is a movement to support survivors of sexual abuse. It brought together people around the world of all races, sexes, sexualities, and genders. Change is coming!

Every person on this planet is important and deserves the equal quality of life. Poverty has been a major problem for all of history, but recent studies show improvement and an all-time low!