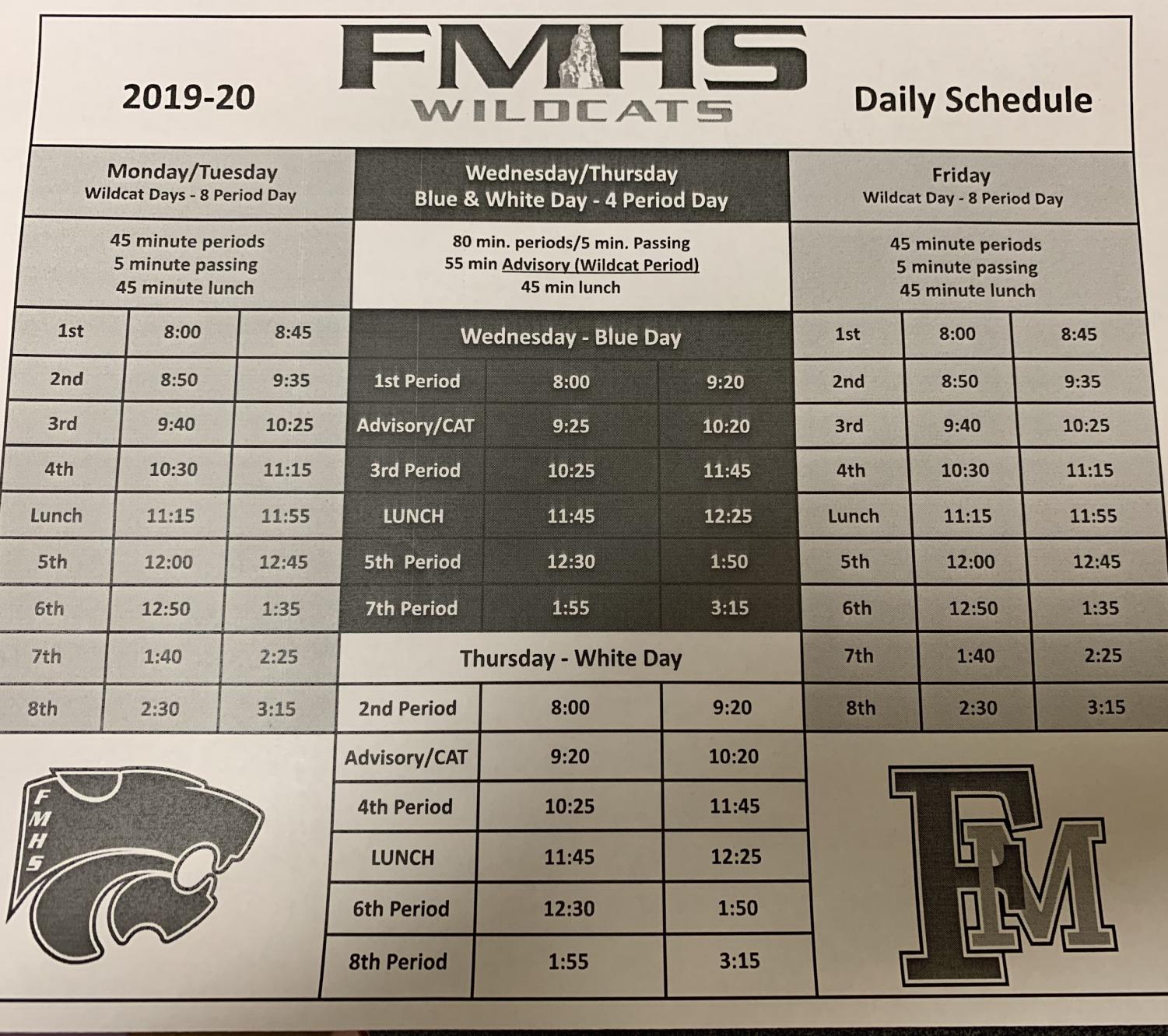 A New Look at Fruita’s Schedule

The 2019-2020 school year has already promised a lot for students and staff at Fruita Monument. The topic of interest has, for a while, been the physical changes and renovations happening to the school itself. However, there are a few lesser-known changes also occurring next year regarding the schedule.

Most students already know about the new look the school will be receiving over the summer. It includes improved security at the doors, an enclosed courtyard/indoor atrium, and a modernized central hallway. For a detailed description of all of the renovations in plan, visit a story completed earlier this year by Abigail Brown. In order to prepare for the construction, students were given the news that instead of completing the school year on May 30th, the end date would have to be moved to May 24th. For most, this news brought more relief than grief . . . although some teachers might be forced to cram some of their finals a little earlier than they had originally thought.

Another exciting tidbit that will most likely see itself into the Fruita life next year is a late start. Assuming that the bussing systems agree, students will be able to get a little more sleep as first hour won’t begin until 8:00. Consequently, school will also get out a little later, at 3:15. One of Fruita’s  counselors, Catharine Mudd, says that “the district has been asking for a late start for years.” A committee was finally put together, with people dedicated to conducting research as to the affect of a later start on the development and health of teenage brains. It took a long time, but the board was finally convinced to say yes. Teenagers do, after all, stay up later due to sports and studying among other things, and a later start has proven to be beneficial in other districts. According to the National Sleep Foundation, “most adolescents undergo a sleep phase delay, which means a tendency toward later times for both falling asleep and waking up.”

An idea that still has to be approved by the area director, but may be included in the Fruita schedule next year, is an advisory. The proposed schedule, which was approved to be published on our website by Mr. McClaskey so long as it was made clear that it was only a proposal, suggests that on Blue and White days (block days), an extended Advisory/CAT time would be added. Unfortunately for many students wishing for the time to move, this allotted period of time will still be between first and third hour on Wednesdays and between second and fourth period on Thursdays. However, the time has been extended longer than it was in the 2018-2019 school year: Next year, it is proposed to be 55 minutes rather than 45.

Lunch for students may have always felt ridiculously early (10:43-11:30 on skinny days and 11:05-11:50 on block days). With the new proposed schedule, students will find themselves having to wait a little longer to go to lunch. It will most likely end up being 11:15-11:55 on skinny days and 11:45-12:25 on block days. Fruita junior Alyssa Biddle thinks “it would be a good idea, but taking off those five minutes would cause most students to be late because [lunch is] shorter.”

No matter what the permanent schedule ends up looking like for the 2019-2020 school year, students at Fruita Monument will nonetheless find themselves looking at something very different than in years past. Many are excited, while others are dreadful, but change is coming regardless and we should all look forward to something new!