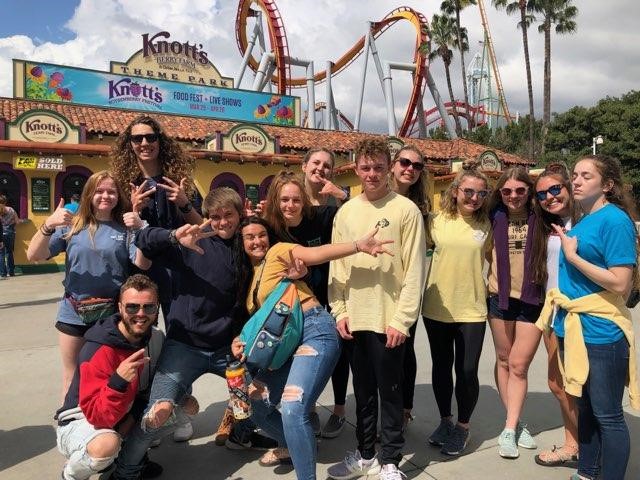 The group at the CA Younglife trip (Abbie Brown)

The group at the CA Younglife trip

Spring Break in Colorado came and went without much celebration. For most people, Spring Break is just another week to spend catching up on lost sleep, perhaps taking a trip to somewhere a few degrees warmer, or maybe working back the money you blew on Christmas presents a few months ago. It’s often seen as that blissful little one week reprieve between the dragging slowness of February and the excruciatingly fast pace of April and early May. To Younglife leaders Aaron and Sarah Livingston, however, Spring Break was seen as an opportunity- an opportunity to impact the lives of a handful of upperclassmen from the Grand Valley.

The Livingstons took a small group of upperclassmen from both Fruita and Palisade Younglife organizations to California to embark for a week of adventure and service. They set off Saturday, March 16th and returned Friday, March 22nd, spending each day in service to each other. The trip included a slew of your typical family vacation musts like Knott’s Berry Farm, kayaking, walking out on the Pier, beach bonfires, Long Beach Aquarium, Crystal Cove tide pools, and surfing. Sarah and Aaron happen to be former surfing instructors for kids when they lived in California themselves, so they eagerly jumped at the opportunity to teach the high schoolers from the desert how to surf, hoping to impart some of their shared respect for the coast.

Even with all this to keep them busy, Sarah insists that the best part of the trip remains something they called, “life stories.” After the day’s excursions were done, the group took time to sit and share their stories, each person getting about ten minutes or so to talk about themselves and anything else they thought worth mentioning.

“I think so often in life it’s really easy to walk through life kind of with a mask on and just letting people assume that everything is fine,” Livingston mused. “Getting to speak life into each other and speak truth was really cool.”

Sharing life stories enabled the students in the group to grow much closer together, see each other from different perspectives, and learn more about one another. It was a way to make the trip not only just a fun adventure for a group of kids to take part of over Spring Break, but also an enlightening experience to learn more about themselves in.

“[They]  just got to be raw and real about where they’re at and where they’ve struggled,” Livingston said of the bonds formed throughout the group. The students were able to forge friendships that will last them years and serve as a reminder of that week in March when they followed their Younglife leaders to California on a whim.

The group also participated in a beach cleanup, breaking off into trios to scour the sand for an assortment of Starbucks straws and empty sunscreen bottles. “The heart of the trip was service and serving each other,” Sarah Livingston remarked.“We wanted the focus and the heart to be more about that and not necessarily about ‘what can I get.’” As part of this, the Livingstons found service projects where service was needed. They wanted the group to “have a heart of service” and not feel like they were obligated or forced to do something just to participate with the group. It was meant to draw people towards serving others and not drag them to it with a hand pinching their ear. With this in mind, the Livingstons waited to find service opportunities as they arose, giving the whole trip a feeling of spontaneity and earnestness that many service groups fail to grasp.