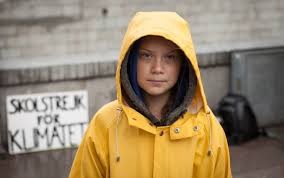 Last month, students across a warming globe pleaded for their lives, future and planet, demanding tough action on climate change. From the South Pacific to the edge of the Arctic Circle, angry students in more than 100 countries walked out of classes to protest what they see as the failures by their governments. According to the Washington Post, more than 150,000 students and adults who connected by word of mouth and social media protested in Europe, according to police estimates.

These highly organized and coordinated school strikes all across the world originated within one 16 year old Swedish activist: Greta Thunberg, who began holding solitary demonstrations outside the Swedish parliament last year. Since then, the number of walkouts have been increasing weekly, students fueled on terrifying headlines that capture the urgency of action for our planet have began inspiring their schools to partake as well. According to Thunberg’s interview with CNN, this rapidly heating climate is, “the biggest crisis humanity ever has faced and still it has been ignored for decades.”

Like many other protests, the goal of these walkouts is to shed enough light on this issue that it becomes impossible for policy makers and global leaders not to take action. The sheer numbers of people that are joining these walkouts is creating buzz already. Some of the protests in other countries are urging politicians to act against climate change while highlighting local environmental problems. For example, In India’s capital of New Delhi, schoolchildren protested inaction on climate change and demanded that authorities tackle rising air pollution levels, which often far exceed World Health Organization limits, as quoted by the Washington Post.

In the same Washington Post article, another example of protests in countries included one in Paris, where teenagers thronged streets around the domed Pantheon building. Some criticized French President Emmanuel Macron, who activists see as not doing enough to reduce emissions. One in Washington D.C. got straight to the point with a banner where protestors spoke in front of that said, “We don’t want to die”, which was seen in another news article from The Guardian.

Because of her wide spread action and way of inspiring the world, Thornberg has been nominated for a Nobel Peace Prize by several scandinavian officials. This widespread reach of protests is a sign of the times, and as the importance of becoming conscious about the climate issues is rising, thanks to the heroic conduct of a teenage girl with a dream, and a desire to keep this planet alive.