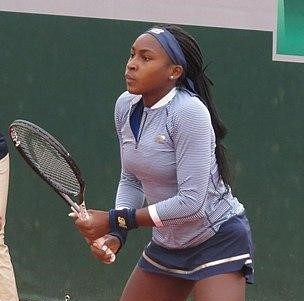 An amazing athlete, Cori Gauff, has struck the pro-tennis world with her great talent at such a young age. CNN said, her unbelievable break at the Wimbledon Grand Slam Tennis Tournament shot her into fame as she benefited from a wildcard that dropped her directly into the qualifiers, where she won her first match. Coco is the youngest tennis player to ever be in the Wimbledon qualifiers.

The 15-year-old tennis player went on to defeat Venus Williams in straight sets during early match of the tournament. “I had mixed emotions,” said student Erica Skilicorn, a student and varsity player for the FMHS tennis team, “because I love Venus however I was very impressed that Coco at such a young age was able to beat such a legend.” Many of Venus’ fans had “mixed emotions” just like Erica. They really want their legend to play well and win but they enjoy seeing the future of women’s tennis succeed at such a young age. According to CNN, Cori Gauff stated “I literally got my dream draw, so I’m just super happy I was able to pull it out today”.

Sadly she went on to be defeated by world No. 1 female singles player, Naiomi Osaka. As of now Coco may go on to become No. 1, but Osaka has done a great job and kept ahold of that mantle.

While Gauff became emotional while leaving the stadium, Osaka offered her to do a joint-on-court interview. Osaka told gauff that it would be better for her to let her emotions out now rather than later, said Wimbledon.com. Osaka had some kind things to say about Gauff to the news and media that were listening, “I wanted her to have her head high, not walk off the court sad,” Osaka said. “I want her to be aware that she’s accomplished so many things, and she’s still so young.” She continued to say, “I know that you guys are coming at her with love, too, but I feel like the amount of media on her right now is kind of insane for her age. I just want her to, like, take care of herself,” stated the New York Times. Osaka really showed compassion and kindness to this young superstar and helped her keep her head held high.

Coco is the youngest tennis player to make it to the third round of singles at the US Open since Anna Kournikovain 1996, CBS Sports stated. They went on to say that since her rise to fame, she has picked up some big-time endorsement deals like, New Balance, Barilla Pasta, and HEAD Tennis. According to the Professional Tennis’ age eligibility rule, Gaiff is only allowed to compete in ten tournaments between the ages of fifteen and sixteen, twelve tournaments at sixteen, and sixteen professional tournaments at age seventeen. According to CBS Sports, as a result of the rule, she will focus on improving her weaknesses, her forehand and her serve, to finish out the season.

Coco has began to gain support from some major names in Tennis history, 23-time major champion Serena Williams, told the Chicago Tribune,”I definitely think it’s the future of women’s tennis.” She further stated, “I’m really excited to just be a ‘fan girl’ and kind of watch.” After her wins at the US Open, she has increased her world singles ranking from 140 to 106, a substantial sum of spots.

She grew up with a love for sports as both of her parents were D1 athletes. Her father played basketball at Georgia State and her mother excelled in gymnastics before competing in track and field at Florida State University, the Women’s Tennis Association stated.

This young teen has done an amazing job showing adults, young athletes, and children everywhere that you can do anything you set your mind to. She has shown us that the impossible is possible if we work hard and believe in ourselves. As she told CNN, “I want to be the greatest”, with every amazing milestone Gauff has achieved, she won’t have difficulty achieving any goals she attempts to achieve. We all can learn so many great things from this amazing young lady, there will be so many more things to learn from this prodigy. We all should wait a listen for more amazing things and continue to learn from this upcoming champion.