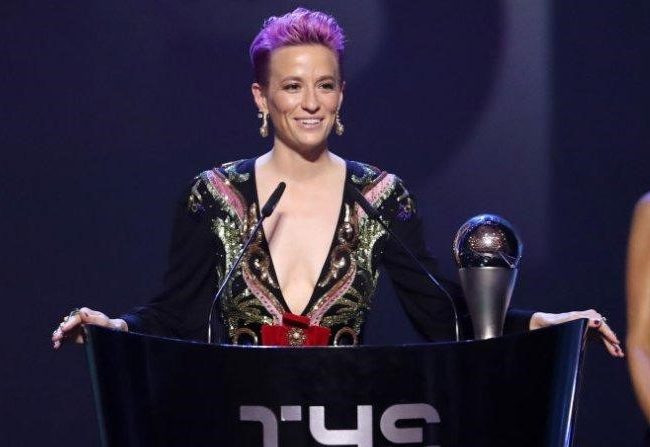 After a historical performance at the Women’s World Cup this summer, Megan Rapinoe of the United States’ national team was named FIFA’s Best Women’s Player in the World on September 23rd. She is the fourth American woman to be awarded the title, along with Carli Lloyd, Mia Hamm and Abby Wambach.

The US women’s team won the World Cup for the 4th time earlier this year. Not only was their victory significant in proving that they were the best women’s football team, but it also strengthened the force of their message to FIFA: their demand that women soccer players be paid equally to their male counterparts. The women’s fight for equality was covered extensively in the news during the tournament, and their work is still on-going.

Rapinoe’s political positions and refusal to tone-down her unabashed confidence has made her a controversial figure in the United States, despite her and the national team bringing the country victory on the world stage. As a strong, gay woman who is critical of the current administration, Rapinoe has been criticized by many, being described as “a groundlessly bitter, petulant celebrity” by conservative commentator Brad Polumbo.

On the flip side of that coin, many people who identify with her in any number of ways see her as a leader in bringing justice to the world of sports. And this hand-in-hand role Rapinoe has had as an athlete and an activist is an ongoing development. In 2016, she was one of the first athletes, and was the first white athlete, to join Colin Kaepernick in kneeling for the national anthem in a protest of police brutality.

Since her victory at the World Cup, at which she was awarded the Golden Ball as the best player of the tournament, Rapinoe has appeared on the covers of magazines, been on talk shows, and has become a leading role model for young players aspiring to be in her position.

She used her moment after being named the best women’s player in the world to address what football players can do to fight inequality. She spoke to her fellow professional players, saying, “Lift other people up. Share your success. We have a unique opportunity in football different to any other sport in the world. To use this beautiful game to actually change the world for better.”

Additionally, she pressed the fact that women aren’t the only people who need to be speaking up, saying “[I’d be inspired] if everybody was outraged about equal pay or the lack thereof, or the lack of investment in the women’s game, other than just women.” Racism and homophobia were additional issues Megan Rapinoe addressed in her speech.

As of today, women soccer players are still paid disproportionately less than male players. The men’s team earns $3,000 more for a loss in a World Cup qualifying game than the women earn for a win, according to the Washington Post. And that is just the beginning of the differences. That being said, it’s an amazing time that we live in when the determined best player in the world of women’s soccer uses her platform to speak out against injustice. Following history-making predecessors such as Abby Wambach and Mia Hamm, Megan Rapinoe is also pushing the limits of her sport. Only now she is pushing soccer’s limits both on and off the field. In today’s world, athletes not only score goals, they work to make the world a better place. That is the greatest game of them all, and it never has an off-season.