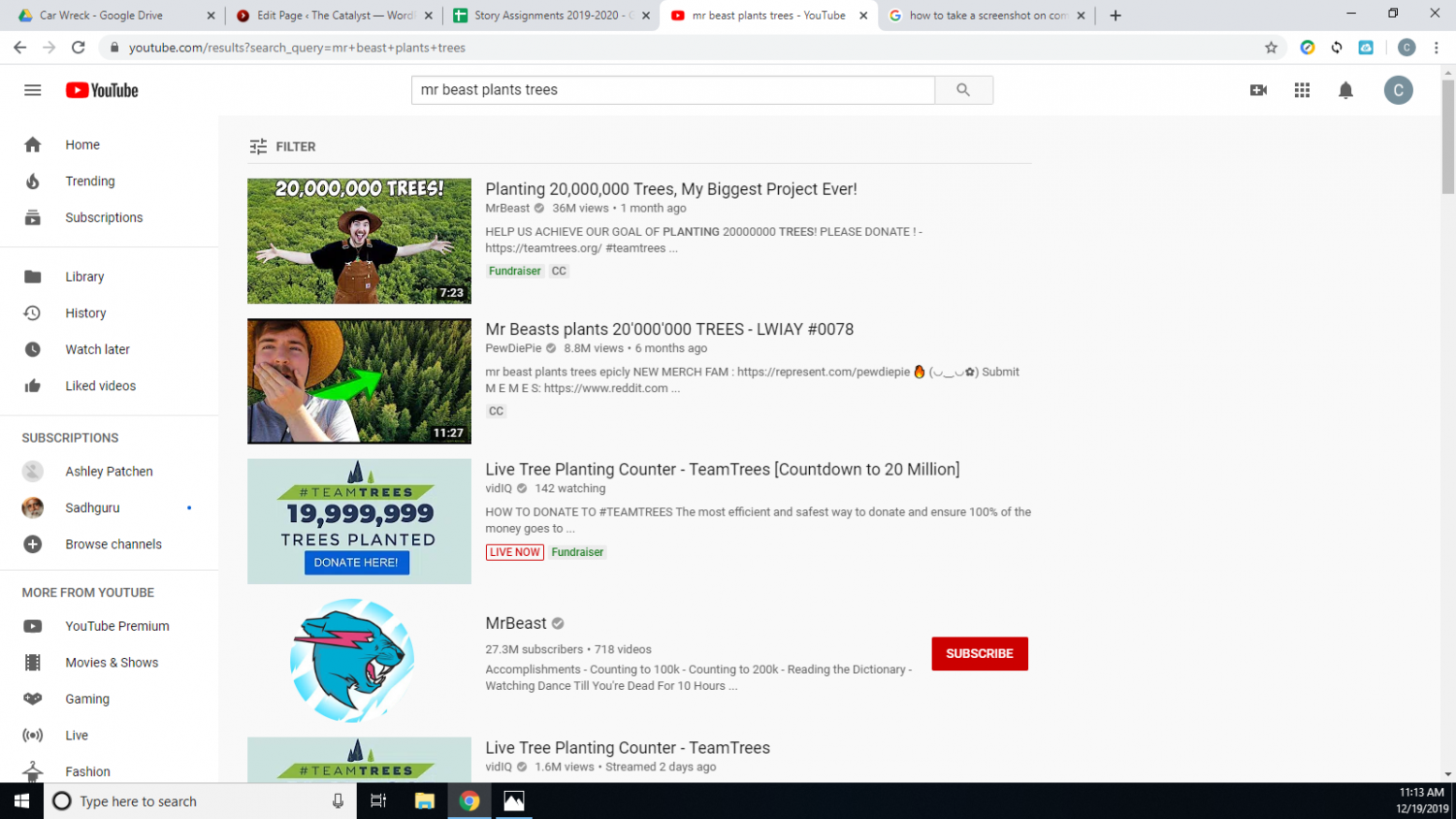 A screenshot of Mr. Beast and his movement of planting trees (Caitlin Lawson)

A screenshot of Mr. Beast and his movement of planting trees

You may have heard of the iconic man who gives away thousands to waitresses, sets up ‘free banks’ which gives out free money to people, donates thousands of goods to shelters, and literally gives homes to the homeless for free, but that isn’t all. This man has also recently announced that he would be planting 20 million trees by January 1st of 2020, for a 20 million subscriber special. This man’s name is Mr. Beast, also known to his friends as Jimmy Donaldson.

Jimmy Donaldson started his online personality of Mr. Beast in February of 2012 making Minecraft tutorials and parodies, but did not take off until 2018, when he started making his outrageously generous videos of donating thousands of dollars to people randomly around his hometown. As his channel picked up, subscribers and famous youtubers like Pewdiepie (former number one ranking YouTuber, with over 100,000,000 subscribers) started to recognize and talk about his generosity.

In May of 2019, he and his fans had gathered an idea for his most ambitious project yet: planting twenty million trees for his twenty million subscriber milestone. Many doubted this idea would take place in real life, as it seemed almost impossible for one man and his five friends to do this alone in five months. So on October 25th of this year, when Mr. Beast announced that he would indeed be carrying out this project by the first of January, many leaped onto the idea of donating to this cause under the name of “Team Trees”.

One man alone cannot plant this many trees in such a short time, but with the help of people world-wide, many have gathered around Mr. Beast to carry out this goal. A few significant participants include Elon Musk, Jeffree Star, Pewdiepie, Verizon Wireless, the Discovery Channel, Jack Dorsey and Tobi Lutke. As I write this article, the planted tree counter has hit an astounding number of 18,883,397 trees planted, with one dollar equalling out to one tree planted.

By teaming up with the Arbor Day Foundation, Mr. Beast plans to plant trees in places most desperate of them, where oxygen levels are low and carbon levels are high. The spokesperson of the Arbor Day Foundation, Danny Cohn, explains that, “The average person can’t afford 150,000 or a million, but we’ve been getting spikes of between 5 and 20 trees every time a large donation comes in and every tree matters, every single donor is important.” He also tells that, “This is just another fact of this generation seeing the importance of getting trees in the ground to help the future of this earth.”

Since I have been watching Mr. Beast since a half million subscribers, I have been quick to know about all of the generous events this man has done. But to my surprise, when I asked my peers what they knew about Mr. Beast, only 49 people knew who he was, opposed to the 30 that didn’t. Only 48 of these people knew what Team Trees was. Since then, I have tried to spread the word over social media and in school about this cause, for it is truly one of the greatest and most heartfelt moments that this generation and decade have seen.

If you or someone else would like to participate in this great historical event, all you have to do is, on a piece of technology that has Google installed, look up #teamtrees or teamtrees.org, and a website will come up displaying the amount of trees donated so far, and options to donate however much money you would like to for the cause. There are only 16 days left to donate 1.2 million trees as of December 17th, so if you don’t know what you want for Christmas this year, what better way to use your’s or your parent’s money for something good like planting a few trees?