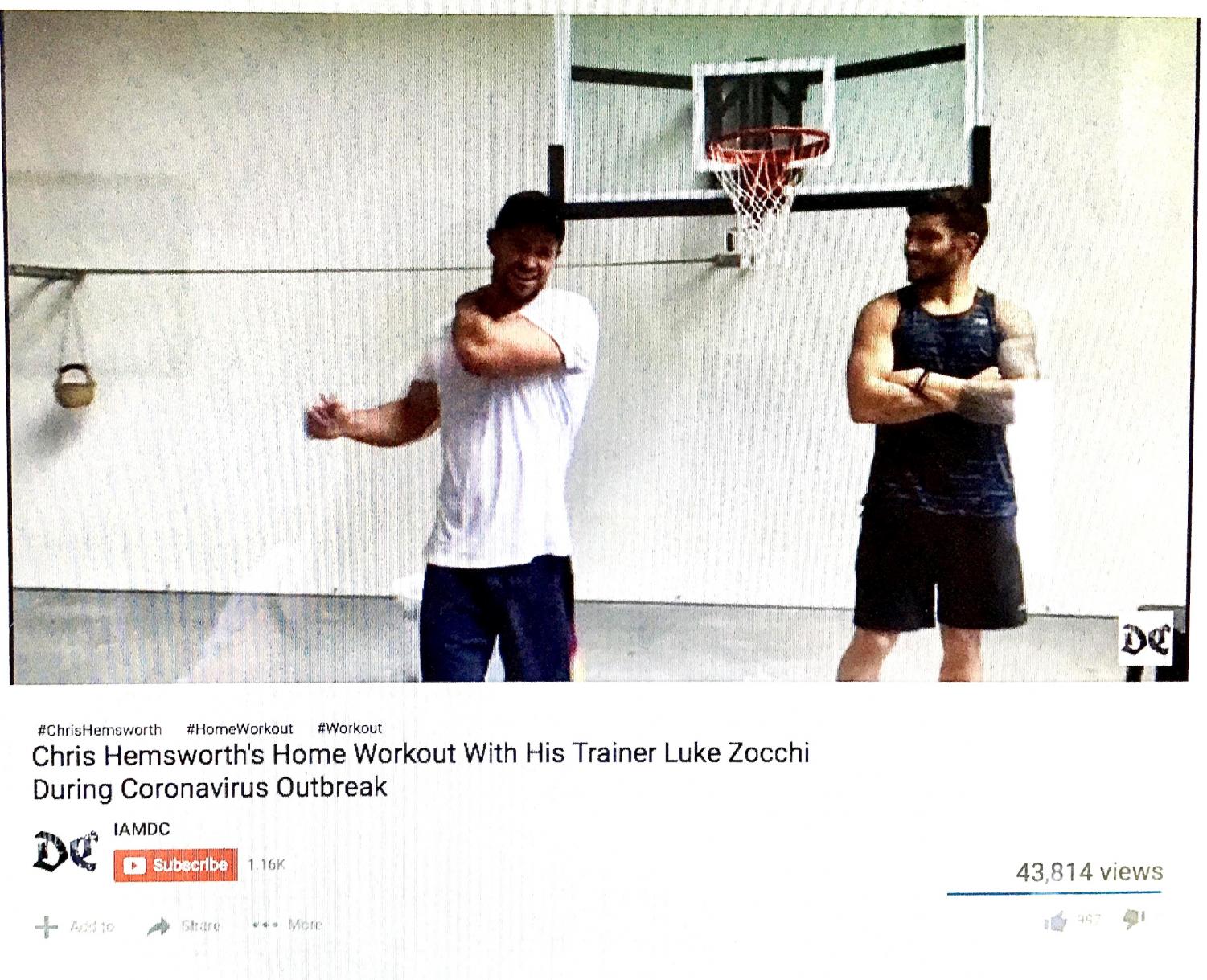 People around the world have gotten creative when it comes to finding fun ways to entertain themselves and others during quarantine. TikTokers have been making more TikToks, singers have been doing live virtual concerts, Lizzo has been doing meditation on instagram for her followers, but one of the best sources of entertainment that this quarantine has provided the people of the world is Chris Hemsworth posting videos of his workouts that can be done from home.

You might ask yourself, “Why are workout tutorials the best thing? I’m not going to be working out.” But stop and consider, it’s not just any workout video, it’s Chris Hemsworth. It’s a video of Thor himself working out in a tight T-shirt. This may have been made with the intent to help people stay healthy in quarantine, but it is just as enjoyable to sit in bed while eating a snack and watch him workout.

Chris Hemsworth first spoke to his instagram followers in early March, announcing that he would be posting a video of great workouts that can be done just with the supplies you have lying around in your house. He said he wanted to make everyone stay safe but active during the quarantine. The next week he posted a video of himself doing workouts with things like laundry soap, stools, laundry baskets and dumbbells.

This video is a three minutes where he walks the viewers through exercises that you can do with each item. He hasn’t posted another video yet and fans aren’t sure whether or not he is going to but many eagerly check his account to make sure they haven’t missed any Chris Hemsworth action.

There are also other reasons that this would be cool for fans of Hemsworth. Jenni Jacobson, a sophomore at Fruita, says, “I think I would enjoy it. I love the “Avengers” and his role of Thor in it, and am a fan of him regardless. I’ve only ever seen him on the big screen, so seeing him outside of his character and what he’s like truly would be very interesting.”

It does give you more of an insight into Chris Hemsworth himself rather than seeing him as the characters he plays.

Others are not as thrilled about it. Christina Ravelojoana, a junior at Fruita, says, “I would probably not be interested because I’m not too familiar with who he is.”

So while many celebrities are helping to ease the boredom of being stuck at home all day, Chris Hemsworth is definitely doing his part to make it more bearable. Whether you watch the video to learn a new workout routine or just for the sheer enjoyment of watching Chris Hemsworth workout, it is definitely worth checking out.