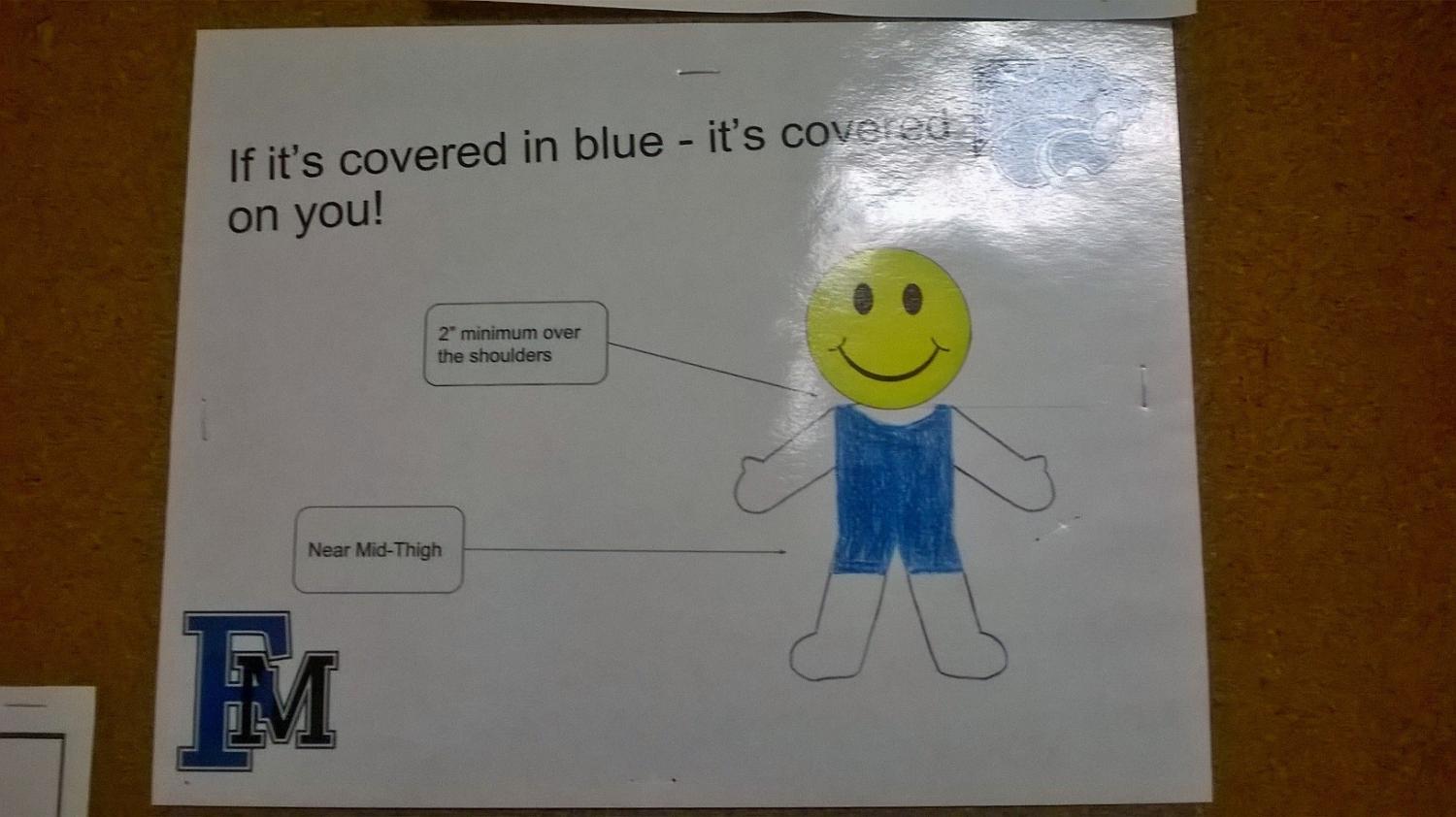 “If it’s covered in blue- it’s covered on you!”. We all know this phrase at Fruita. School dress code. This year the dress code is stricter than ever and many students, as well as teachers, agree it’s come a little too far.  Fruita Monument has always had a dress code policy of covering your stomachs, shoulders, backs, cracks, racks and sacks. Personally, I do feel the dress code is overdone. I understand the modesty part, but for me (as well as for other students), it’s gone a little too far.

Getting dressed in the morning is already stressful enough due to the pressures of society to look good or be caught up on the latest trends. Mr. Palmer is a literacy teacher at Fruita Monument and when asked about his opinion on the dress code he stated that the way you dress is more so how you express yourself.

“I don’t remember the dress code changing at all its always been the same issue with shoulders and stuff. It’s not a big issue for me, as long as it’s not over the top. I lean more towards students expressing themselves through their clothing as long as it’s not about beer and alcohol. I find that very disrespectful”. Teachers agreed with that statement saying they find shirts with illegal things on them far more distracting or disrespectful then stomachs and shoulders.  Most students agreed they would be more driven to follow dress code if it wasn’t about things that didn’t matter. Mrs. Castillo stated,

“I’m not opposed to a dress code, I just think it’s more towards females and should be administrated positively. Students should be able to express themselves through the clothing and dress code shouldn’t make them feel bad for expressing themselves,” Students also agreed to those statements by adding comments,

Students dress the way they do for a reason whether its expressing an opinion, an emotion, or it’s what they are comfortable being seen in. When asking girls and boys on their opinions about the dress code, the boys said they don’t have any issue with the dress code because, let’s be honest, guys don’t want to wear shorts too short, or shirts too low cut anyways. When asking females, they believed the most irritating thing about the dress code is the shoulders. Females feel personally targeted when it comes to this issue. Girls all have different body types and the ones with curvier bodies are the ones who are dress coded more because they are more noticeable.

“What bothers me is that 2 girls could be wearing the same shirt and the one with more curves will get dress coded just because their body types are different. I find it a little sexist”. Stated Mrs. Castillo.

“Guys are seen wearing muscle shirts and they never get dress coded but if my shoulder straps aren’t 3 fingers wide then I’m sent home” stated Zoe Williams.  When asking Jonathan Jameson (grade 10) if he found shoulders appealing in any way speaking for the boys, he stated,

“No, if a girl is wearing a shirt where I can see her shoulders it doesn’t bug me, like it’s just a body part”. The opinions of the students led to asking teachers if they felt the same as the students. Mrs. Castillo stated the looks of a girl’s shoulders don’t distract her in any way. Mr. Palmer also agreed. Speaking for the students, shoulders aren’t something that catch guy’s eyes.

“I don’t know why shoulders aren’t allowed. Boys don’t get distracted by them, they aren’t sexy.” Stated Corra McKeon (grade 10).

My point in writing this article was not to come off as disrespectful towards the admin or diss the dress code because I do agree we need to have our limits when it comes to shirts with illegal things, or a girl being half naked walking through the hallway. Although, the administrators should try to understand a student’s expressions within their outfits and begin to create a more positive and accepting environment for all students at Fruita Monument.